Part of the attraction to science fiction, fantasy and some horror for me is that all three are fictions that almost always run the main story and a side story.  I’m not talking about subplots here, but the implied side story of the invented world the main story exists in.  In the kind of speculative fiction I like best, the main story is integrated into the side story so that the two can’t exist without each other.  Gattaca is a good example of this.  The main story is what Heinlein would have called, “The little tailor.”  A man is forced to discover his inner strengths.  It’s a classic underdog story where the least likely character makes good against overwhelming odds, coming out on top at the end.  It’s the plot of Rocky, and Cinderella and any one of a gazillion sports movies (think Rudy). 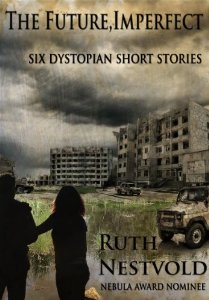 But, as I said, what I like about speculative fiction is the side story, the speculative element.  In Gattaca, it’s all about the repercussions of how knowing a lot about genetics can change society.  I like that after I watched Gattaca, I continued to think about that side story.  Now, whenever I read about glow-in-the-dark fish or cloned pets, or Frankenfood, I think about Gattaca, just like when I hear about how many cameras record what I’m doing in public, or how Google sends ads specifically picked just for me that I think of 1984.

I don’t get this same effect from Romeo and Juliet (I don’t think too often about sleeping draughts or balconies or Verona—interestingly enough, I do think about “a plague on both your houses”).

What sparked me on this train of thought was reading Ruth Nestvold’s short story, “A Handful of Dust.”  The main story is an ironic, thwarted love story.  Dane, the point of view character, has gone into the wilderness that a horrifyingly post-apocalyptic America has become.  He is traveling with Leah, his ex-love, looking for her lost and possibly dead husband.   Of course, Dane would be happy (sort of) to not find him.  The emotional crisis in the story is pleasantly complicated.

What makes the story work for me, though, is the post-apocalyptic setting.  Awful things have happened, and the America that Americans know has been destroyed.  Part of the story takes place in the abandoned and ruined Disneyland.  What the story left me thinking about were the hints Ruthvold dropped of what caused the apocalypse and what might be left if truly bad things happened in America.

Ruth has gathered a half dozen of her post-apocalyptic stories into a collection called The Future Imperfect.  Lots of cool science fictional thinking behind the stories that leaves me with possibilities to mull over when I finish reading.

Good fantasy gives me side stories to consider: the infinite forest in Robert Holdstock’s Mythago Wood, or the seeming coincidence that is all magic in Jo Walton’s Among Other’s or the convincingly described under-London of Neil Gaiman’s Neverwhere.

Horror that works for me works this way too.  I love Lovecraft not because of his prose (which is often laborious), but because he gave me nightmares with his ideas.  Stephen King does that to me also, particularly in The Dark Tower series or his weirder visions like Under the Dome or Salem’s Lot.

Maybe I’m a shallow reader, or I need a lot to keep me distracted, but stories that are just about their characters’ plights—and nothing else—leave me a little cold.  Maybe that’s why I’m not too fond of cookie-cutter fantasy.  Generic, vaguely medieval, European knock offs don’t get me thinking anymore.  I read the King Arthur stories, and I loved them, but a revisit to that setting feels like recycling, just like a thinly rearranged Middle Earth doesn’t work.  I like being provoked by NEW settings and the implications they bring, whether it is science fiction, fantasy or horror.  The difference between good reading and bad reading is the difference between the deeply imagined clockwork universe that is Jay Lake’s Mainspring and a cheap knockoff of Star Trek.

I keep that in mind when I’m writing speculative work.  The speculation that serves as the story's setting has to be interesting all on its own.  When the character’s names and situations have faded from my readers’ memories, I hope that the speculative bit lingers.