Connie Willis did a one-hour chat on writing dialogue at MileHiCon a couple weeks ago, and I took a bunch of notes.  So, since I think a lot about dialogue, and she’s a genius, I thought I would go through her main points with my comments.

Dialogue is and is not conversation.  She chatted for a bit on how real dialogue, the sort of stuff you’d get if you set up a tape recorder between your friends, would be very difficult to read.  Real conversation has a tendency to have too many stops and ellipses and direction changes.  We rely a lot on visual clues when we talk face to face.  So written dialogue tries to sound like speech, but it’s more coherent.  It’s a suggestion of how speech sounds rather than the real, often incomprehensible, things we say to each other.

Dialogue is distilled conversation.  This is an extension of what she started with.  Conversation on the page can be a little like speech for a play.  Our characters have a chance to say the things we often wish we would have said if we’d had more time to contemplate it.  In some cases, dialogue can rise to the form of “banter” (more on that later).

Start a story AND dialogue where the story begins.  She talked about stories that start too far back, and then when edited lose the first few lines (or paragraphs or pages).  Dialogue can be like that too.  Writers often start dialogue with meaningless greetings or idle, warm-up chit chat.  Part of “distilling” dialogue is starting with the important, plot-relevant speech.

Write the dialogue first and the blocking later.  Cut out ½ of the rough draft dialogue and insert blocking where needed.  She said that this is her technique, not the only technique that is successful.  For her, she wants to get the conversation down, so she writes it uninterrupted (no description, action, introspection, etc.  Nothing that you would write outside the quotes).  That way she can hear the conversation as conversation.  Cutting it in half gets rid of the chaff.  Cutting it in half is part of the distilling.

Dialogue that is expository in nature should come out in little pieces.  Long speeches of exposition are dry and dull.

Dialogue, particularly exposition, is better “under heat.”  What she meant by this is that any conversation is better if the characters are also doing something else, preferably something stressful.  If they’re just standing around, talking, the story can stall out.  The reader can lose touch with the world the characters are having the conversation in if they aren’t interacting with the world. 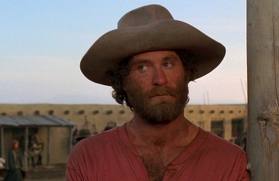 Dialogue raises questions.  Good dialogue doesn’t always just give information.  It can hint of information the reader will want to know, particularly at the beginning of the story where what becomes interesting is what the dialogue means.  The characters are talking about something that is clearly meaningful for them, but they aren’t aware of the unseen eavesdropper, the reader, so the conversation can raise a question for the readers to be interested in.  They’ll keep reading to find out what the characters in the story were talking about.  I particularly like all the early dialogue about what happened to Paden’s dog in Silverado.

People in a fight with each other will say things they wouldn’t otherwise say.  When people are mad at each other, they’ll say information-filled things, like “We’ve been married for fourteen years, and you have never been considerate of my feelings,” or “You said when you hired me that I’d be a millionaire by now and own my own string of racing horses, but I’m still mucking the stable.”  Also, characters in a fight may reveal their real thoughts that they wouldn’t say under other conditions.

Dialogue is hardly ever what it’s about.  We talk in code.  She talked for a while about subtext, and how seldom we actually, straight on, address what is on our mind, especially if the issue is emotional or close to the core of our beings.  She gave examples of people saying they love each other without ever saying “I love you.”  She really likes that kind of dialogue.  Characters saying exactly what is on their minds is often the hallmark of corny or hackneyed work.

Dialogue is a great place to address essentials and to make revelations.  This is related to conversation under heat from above.  In high tension situations, the truth can come out (“Luke, I am your father.”)

Dialogue is partly what the person says and how others react to it.  Important dialogue is hardly ever important to just the person who is saying it.  We understand the importance of what people are saying by how other characters respond to it.

Indirect is better than direct.  This is related to the “talking in code” from above.  One of the advantages of talking indirectly is that it deepens the connection between the characters who are fictional constructs on the page.  If we want the characters to develop the kind of reality we expect from real people, then like real people they have a history between them.  They understand each other’s indirectness just as we can.  Also, answering indirectly can indicate what is most important or most sensitive in the character’s life.

There is an exception to the “indirect rule,” and that is if one of the characters are in disguise.  When a character is incognito, he can say exactly what is on his mind.  Think of C.D. under the tree in Roxanne or Heathcliff using Linton to write love letters to Catherine in Wuthering Heights, or Dustin Hoffman in Tootsie.

Banter is the highest form of dialogue.  She used several film clips to illustrate this, including clips from Moonlighting, The Owl and the Pussycat, and a couple others.  Banter is two characters on the top of their games, both saying exactly the right, clever, witty, penetrating comment at exactly the right time.  Banter is like a long rally in an epic tennis match.  The characters are smarter, snappier and funnier than real dialogue.

I have written about dialogue before.  See: Punctuating Dialogue and an Exercise, Whad 'Ya Say:  Writing Dialogue,